We’re celebrating “Ghostober” by sharing some of our spookiest tales and haunted spots in Del Norte County, California.

Haunted Places In and Around Crescent City, California

One of the best things about traveling is exploring the unknown, hearing the stories and seeing the sites that make a place unique. Del Norte County has a rich and sometimes haunting history. There are stories that may send a chill down your spine while others may spike your paranormal curiosities. In any case, these spooky spots — and stories — definitely add to the enchantment of Crescent City and all of Del Norte County.

After the thrills of the beach and forest trails, explore these spooky spots for thrills (and chills!) of a different kind. Have a spooky story to share from around Del Norte County? Leave your comment below.

Lillian McNulty was one of the first non-native residents of Crescent City. Built in 1897, she lived in the Victorian-inspired McNulty House until her death in 1957. In her will, Lillian specified that the house should serve the community as a library or museum. Her wishes were honored for several decades but eventually, the house was sold as a private residence. In the years after the sale, several reports have surfaced about an apparition of a woman sometimes wandering the house or staring out of the window.

A former resident of the home reported seeing a woman dressed in white Victorian clothing. The ghostly figure was walking through the dining room. The witness quickly ran after her, believing there was someone in the house. As the apparition passed into the kitchen it disappeared into thin air.

Both visitors and residents  say they have experienced an evening of ghostly sounds and doors opening on their own, as well as disembodied strange voices. Others say they hear inexplicable whispering. When walking by the McNulty home, take a closer look and you may see the ghostly residents lurking within.

The McNulty House is on the registered list of California Historic Preservation Sites.

Less than a mile from the McNulty House on a beautiful bluff above the Pacific, you’ll find the Brother Jonathan Memorial. The paddle steamer S.S. Brother Jonathan fought against stormy weather in July of 1865 before colliding with the jagged rocks of St. George Reef. The steamer sunk in less than 30 minutes and more than 200 lives were lost. Nineteen people survived to share the tragic tale. The memorial bears only 28 headstones but is a serene yet haunting reminder of the disaster.

There is something spooky yet inspiring about lighthouses. Battery Point Lighthouse, off the coast of Crescent City, withstands the ocean’s waves to keep ships safe. In operation since 1856, the Battery Point Lighthouse maintains many centuries-old traditions, including resident lighthouse caretakers. They have reported a rocking chair moving on its own, as well as the sound of boots trudging up the lighthouse stairway as if the ghostly keeper was going on their rounds. Visitors to the lighthouse have actually reported being touched on their shoulders.

Battery Point Lighthouse is one tough cookie too, having survived a tsunami in 1964. Tours available (posted in parking area) or go explore the exterior on your own during low tide. 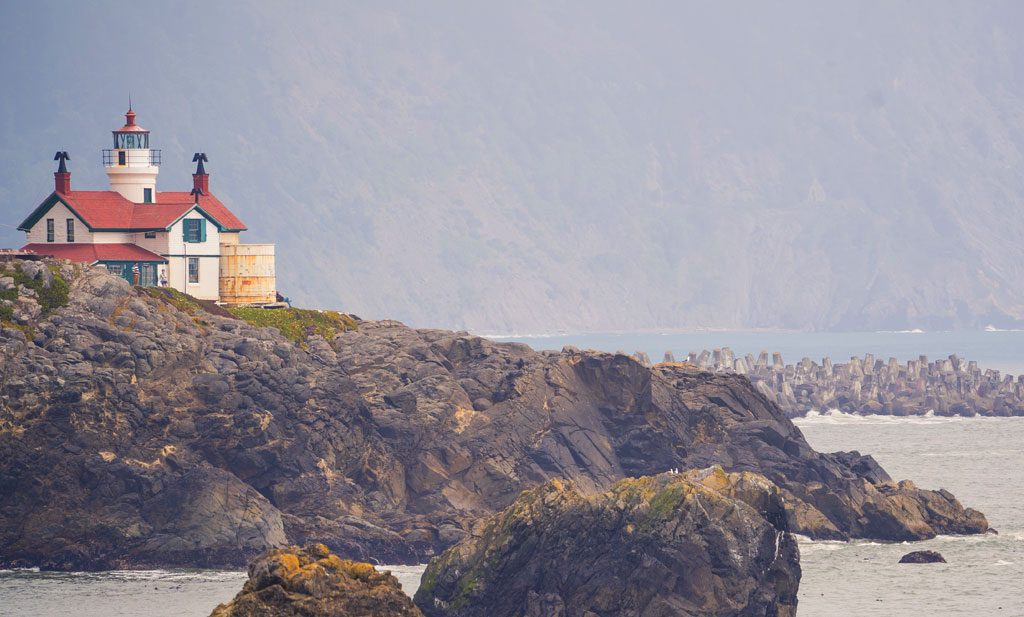 Just a short drive from Crescent City, tucked away in the Six Rivers National Forest, you’ll find Patrick Creek Historic Lodge. Built almost a century ago, it has long been a place that welcomes travelers with its beautiful stone fireplace, a killer Sunday brunch, and a notable sign that reads “Eat, Booze, Snooze”. One such visitor may have been Maude. Her ghastly tale begins on her wedding day. Rumors suggest Maude was deserted by her fiance and in her misery, committed suicide in her room at the lodge. Guests have reported apparitions in the room as well as the dining room. 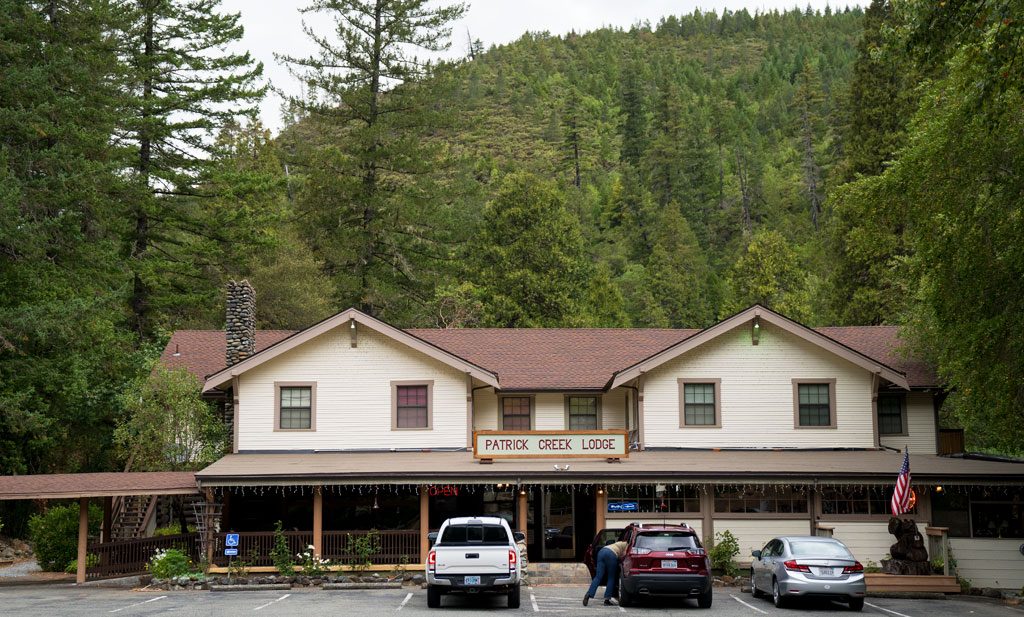 Long before shipping and logging took over Northern California, there was the tribal nation of Tolowa Dee-ni’. The wild rivers, endless ocean, and massive redwood forests provided abundant resources. But one resource remained untouchable – Dead Lake. The lake is somewhat of a phenomenon; it has no inlet, and despite the creek that flows out to the Pacific, it maintains the same water level at all times. According to the tribal nation’s mythology, an altercation between councilmembers destroyed the once harmonious balance of the People. The earth crumbled and opened beneath them, swallowing the members of the tribe. The swampy abyss that remained is Dead Lake, and it reminds the Tolowa to work together and maintain peace.

To this day, the Tolowa will not go to the lake. Gary Honeycutt, on the other hand, has ventured to Dead Lake on many occasions. Gary is a paranormal investigator who has experienced many spectral encounters around the lake. He even captured a recording during one of his visits. “We got the name Marshall just as clear as a bell,” Gary recounted. “He told us he drowned there, along with many others and then said to leave this place.”

Nearby Dead Lake is another lagoon with a dark past. Lake Earl was the site of the 1854 Achulet Massacre in which more than 65 Tolowa people were killed. White settlers were anxious to develop the lands of northern California. Early one morning, the settlers attacked the Tolowa. There were some who fled to the lake, but the aggressors waited until they came up for air and continued the attack. It is believed that many Tolowa people lay in the depths of Lake Earl. Locals have reported strange feelings of being followed on nearby trails.

The redwood groves of Del Norte County are mysterious places. Ancient trees tower above you. The ethereal light lurks through the canopy. But is it a place to find something haunted? Maybe.

Very recently, Lea Teodoro was enjoying a beautiful, quiet morning hiking in Stout Grove with her boyfriend. They snapped a few prime photos and on their way out, an older couple stopped them. They asked if they noticed the girl sitting right in their photo spot. Lea brushed it off and continued exploring. “Later that evening I happened to come across a chilling photo,” Lea shared on social media. “I saw this girl at the far corner where I had stood. She looked young, red hair and her face was blurry.” Lea did a bit of research and discovered a young, red-headed female hitchhiker had been murdered in 1994, and her body was left at the Stout Grove trailhead. Read the full story and see more photos on her Facebook post. 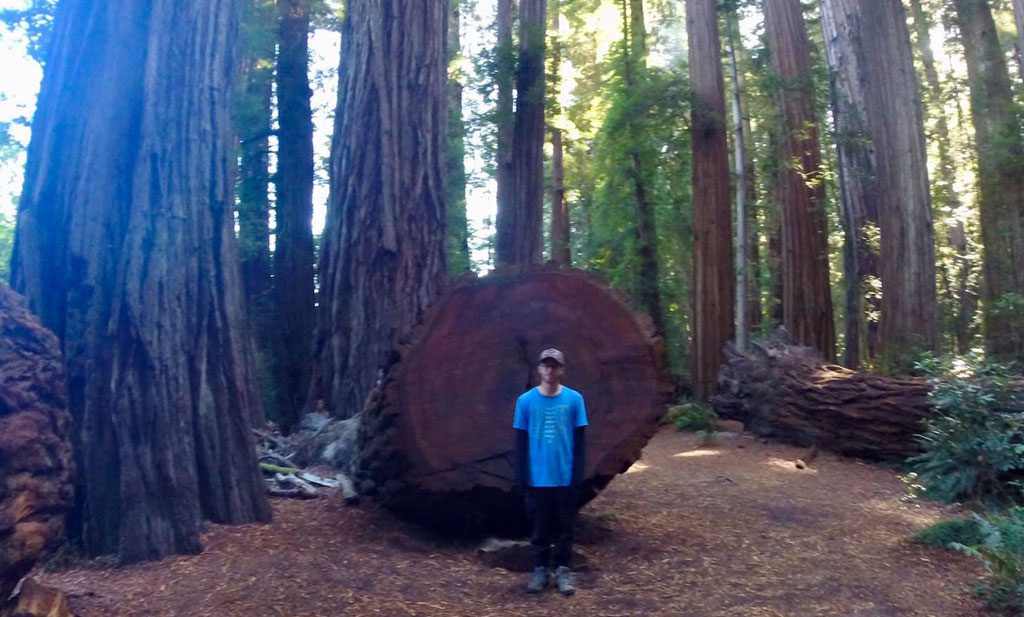 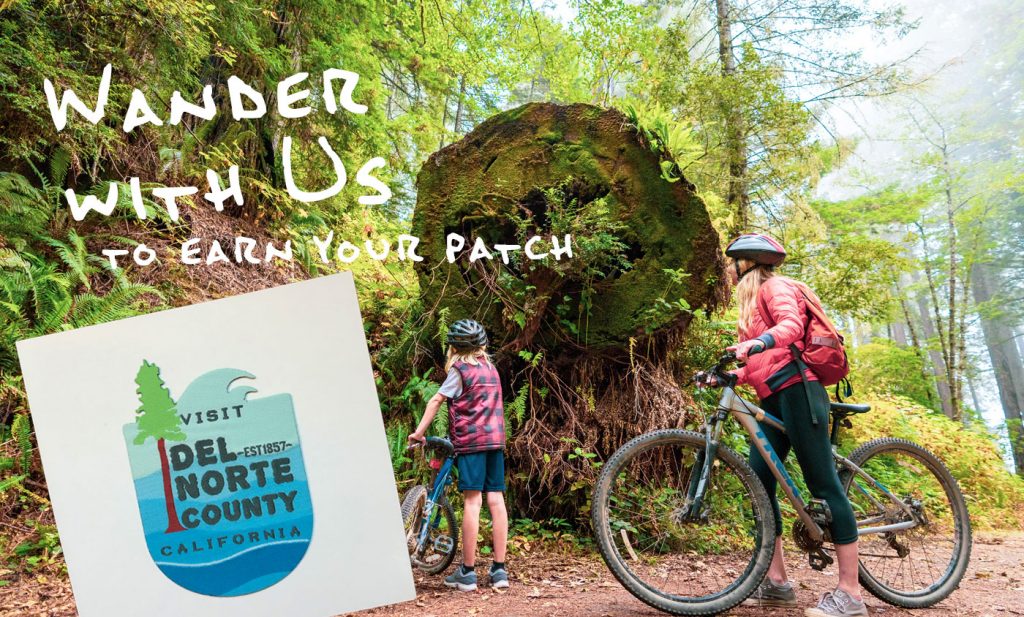