Skip to content
Map of the Movies Filmed in Del Norte County, California

Film buffs rejoice. The Map of the Movies map — made possible by the Humboldt-Del Norte County Film Commission — is now available as a mobile app. Adventure to Prairie Creek Redwoods National & State Park to see where dinosaurs roamed in Jurassic Park: The Lost World, amble to the Forest Moon of Endor where the Ewoks lived in Star Wars: Return of the Jedi, or see where E.T. The Extra-Terrestrial phoned home from.

From thrillers, horror, and sci-fi movies to beloved family classics, seek out the movie spots scattered around Del Norte County, California below. 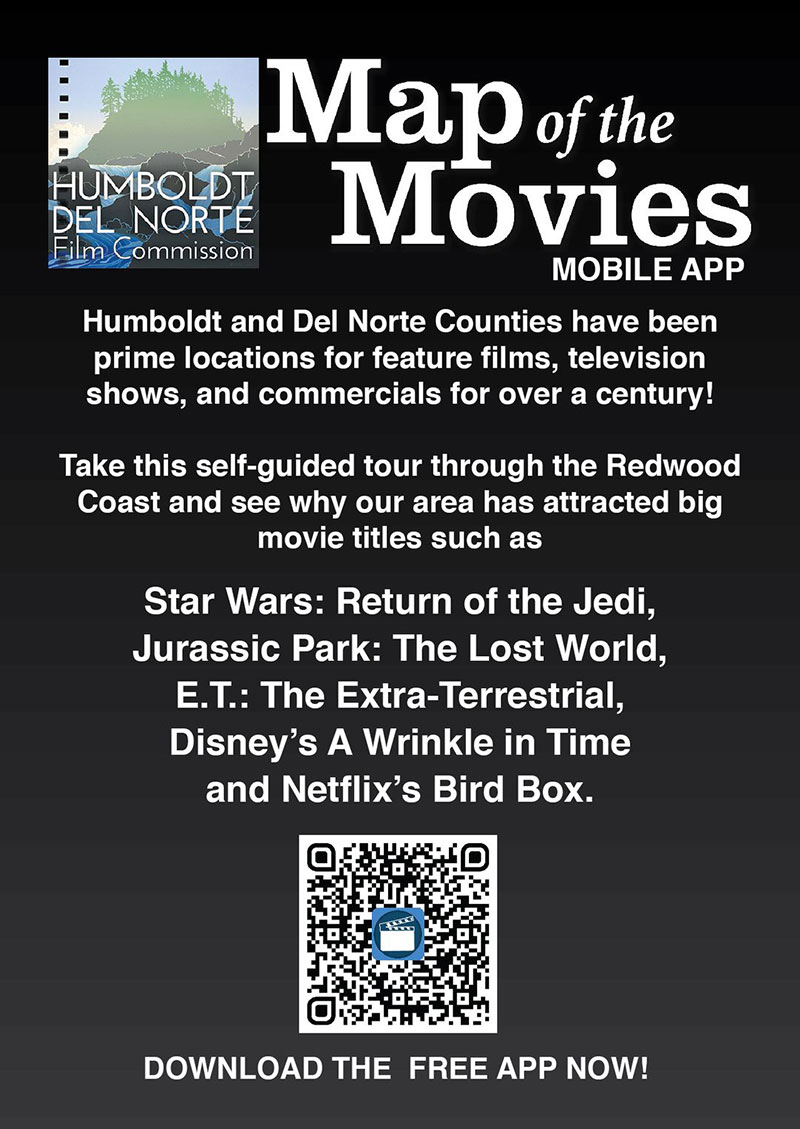 Star Wars: Return of the Jedi

(2018) ‘Bird Box’ completed three weeks of filming in the Redwood Region earlier this year. Prior to filming, the Production spent six months scouting and securing locations throughout Del Norte County. Filming took place in Crescent City, Jedediah Smith State Park, and on the Smith River. The film, which stars actress Sandra Bullock, is an adaptation of the 2014 post-apocalyptic thriller novel by writer/singer Josh Malerman.

(1997) Wedding Rock in Patrick’s Point State Park and Fern Canyon in Prairie Creek Redwoods State Park appears as the rain forests of Isla Soma in Steven Spielberg’s sequel based on Michael Crichton’s best-selling novel. Note: Permits are now required to enter Fern Canyon by vehicle from May 1 – Sep 30. You can still hike or bike in (12 miles one-way) without needing to get an online permit.

Love in the Time of Monsters

(2014) Two sisters travel to a cheesy tourist trap where they battle toxic monsters. Filmed at Patrick Creek Lodge and Trees of Mystery.

Not a Moment Too Soon

(1994) The music video for Tim McGraw’s hit song from his second album featured the historic Battery Point Lighthouse in Crescent City as its backdrop.

(1983) The terror commences in the Redwoods at Stout Grove in Jedediah Smith Redwoods State Park.

The Tree of Life

(2016) Paul Dano and Daniel Radcliffe starred in this tale of a hopeless man who is stranded on an island and befriends a dead body. Filmed on Agate Beach in Patrick’s Point State Park, Houda Point Beach and Humboldt Redwoods State Park.

Primal Rage: The Legend of Oh-Mah

(2016) A newly reunited young couple’s drive turns into a nightmare as they are forced to face nature, unsavory locals, and a monstrous creature. Filmed on the Palmer Westbrook Ranches.

(1995) Johnny Depp, on the run after murdering a man, encounters a strange Native American named “Nobody,” who prepares him for his journey into the spiritual world. Filmed on the mouth of the Klamath River.

Last of the Mohicans

(1936) In this version, the Mohicans were played by 20 local Yurok tribe members. The exciting canoe chase scene took place on one of the several rivers in Del Norte County, while other filming was done by the mountains near Lake Earl in Crescent City.

A Wrinkle in Time

(2018) After the disappearance of her scientist father, three peculiar beings send Meg, her brother and her friend into space in order to find him. Filmed in Patrick’s Point State Park and Eureka.

(1990) The tale of revenge was filmed at the Mad River Community Hospital, the restaurant at Moonstone Beach, and Trinidad Pier.

(2008) The comedy-drama finds a Los Angeles medical student stranded in Humboldt County. Filming took place in many locations: Blue Lake, Eureka, College of the Redwoods, Arcata and locations in Trinidad including Luffenholtz Beach.