The water is always calling in Del Norte County where scenic rivers and swirling ocean collide for some of Northern California’s best paddling sports.

Consider kayaking or rafting down a plunging whitewater canyon in Gasquet. Go standup paddle boarding along a blissful bay or the serene Smith River in Hiouchi. See sea lions and elephant seals from a kayak at the Castle Rock National Wildlife Refuge. Or go fishing by kayak — cast your line for rockfish, lingcod and albacore tuna. Del Norte County’s coastline and rivers are known for some of the best Chinook and Coho salmon runs, too.

Choose a Del Norte County paddling adventure and paddle your heart out from Crescent City to Klamath, California!

1.   STAND UP PADDLE BOARD & KAYAK AT SOUTH BEACH IN CRESCENT CITY

Experience the chillest vibes in Crescent City on South Beach just south of the jetty. Standup paddle board into the sunset on calm water. The jetty protects the cove from the ocean’s churn, making for optimal sunset cruise conditions. When the surf’s up, paddle a surfboard and ride the mellow waves. The waves are gentle enough for newbies. You can find wetsuit and surfboard rentals in Crescent City at Local Boys Surf & Skate Shop and from the beach shack, operated by Redwood Rides (next to Schmidt’s House of Jambalaya) during the summer months.

2.   PADDLE ALONG THE KLAMATH RIVER IN CALIFORNIA

For an adventure with rich history, book a Yurok Redwood Canoe Tour of the Klamath River. Gently glide the river in a traditional Yurok canoe, called an ohl-we-yoch, dug-out from a redwood tree. A local Yurok guide will share stories and cultural information from the thousands of years the people have inhabited the area. The Klamath River is a rich resource for the Yurok people. As the tour cruises to the mouth of the river at the Pacific Ocean, you may see a variety of wildlife in and out of the water, including resident whales. Tours operate every June through mid-September and depart from the Yurok Country Visitor Center in Klamath. 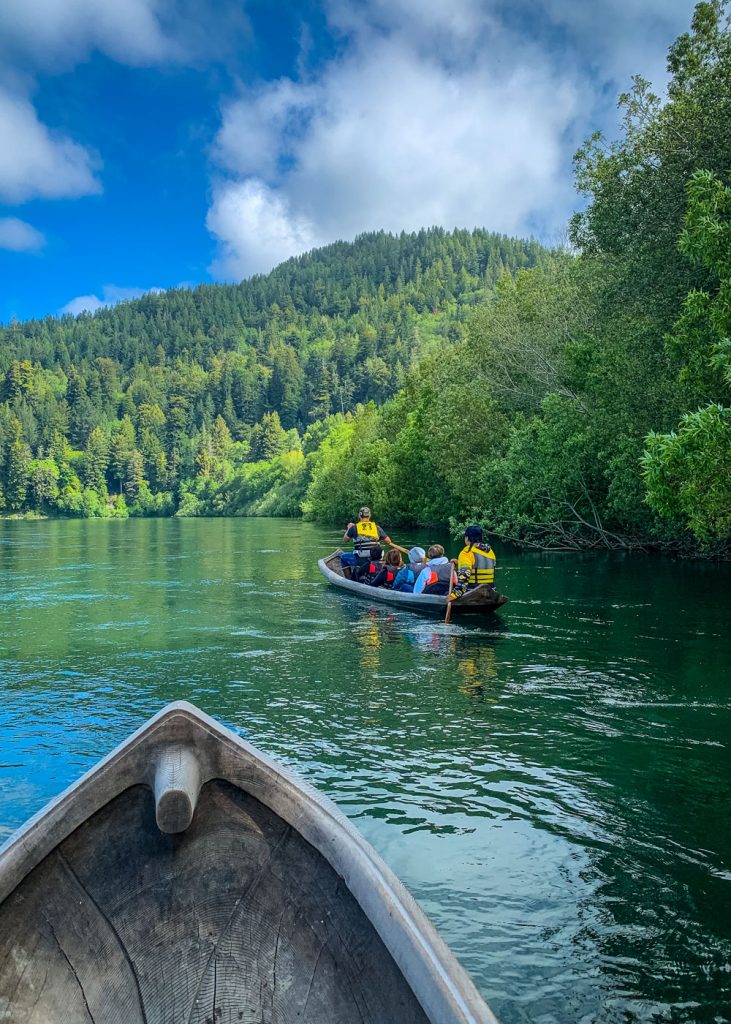 Get a 360-view of the historic lighthouse that graces Crescent City’s shores. While you can access Battery Point Lighthouse at low tide on foot, we recommend kayaking around it. If you’re lucky, you’ll spot both resident and migrating humpback and orca whales as well as elephant seals and sea lions. Guided historical and naturalist tours are available from Redwood Rides as well as daily kayak rentals for the more experienced. And if you’d rather see it from a motorized vessel, Stella’s Adventures can take you for an unforgettable boat ride.

Soak up shoreline views of jagged cliffs, hopeful fishing folk and marshy inlands along Pebble Beach. The beach sprawls through several coves so there is plenty of ocean to kayak. Take a break on the beach with a picnic and agate hunting during low tide.

5.    PADDLE AROUND AN OFF-SHORE ISLAND IN CRESCENT CITY

Paddle away from the shore to see a wild menagerie of ocean dwellers. Castle Rock National Wildlife Refuge is a 14-acre island habitat protecting several thousand birds including the Aleutian cackling goose. It also serves as a wayside rest stop for seals and sea lions. Launch your sea kayak from Pebble Beach for a short yet scenic half-mile paddle. Or let the experts lead you to wildlife wonder with a Redwood Rides guided kayak tour of Castle Rock. This kayaking tour is perfect for beginners and even kids ages 10 and up. 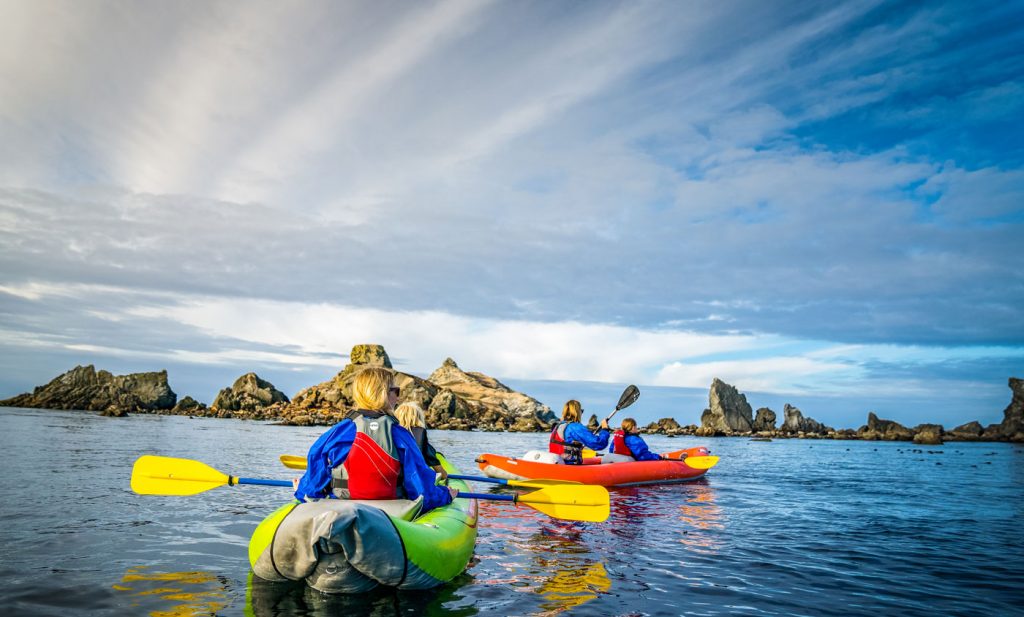 Float the quiet waters of  Lake Earl, a tranquil lagoon nestled amongst sand dunes and salt marsh. Though Lake Earl is the largest lake in Del Norte County, the heavy vegetation keeps boaters to a minimum. Kayak or canoe through calm water and keep a lookout for elk, beavers, quail and grouse. Lake Earl sits between both the Tolowa Dunes State Park and the Lake Earl Wildlife Area.

7.  RAFT, STANDUP PADDLE BOARD OR KAYAK THE SMITH RIVER IN CALIFORNIA

Flowing from northern mountainous regions, the rivers in Del Norte County run wild and pure. Smith River is 25 miles of undammed adventure. Post up on the sandy shoreline at the South Fork of the Smith River for a leisurely day of kayaking and paddle boarding and some good old swimming. The day use area of Jedediah Smith Redwood State Park is another sweet spot for easy paddling through emerald streams. Launch at South Fork or Middle Fork for a rush through Class III to V rapids through a ragged canyon. Guided kayaking tours on the Smith can be booked through Redwood Rides. Whitewater rafting is best during winter, spring and early summer. The North Fork offers whitewater enthusiasts some serious thrills with Class V rapids. The Smith River is home to the annual Boatsmith Whitewater Festival every February in Gasquet. 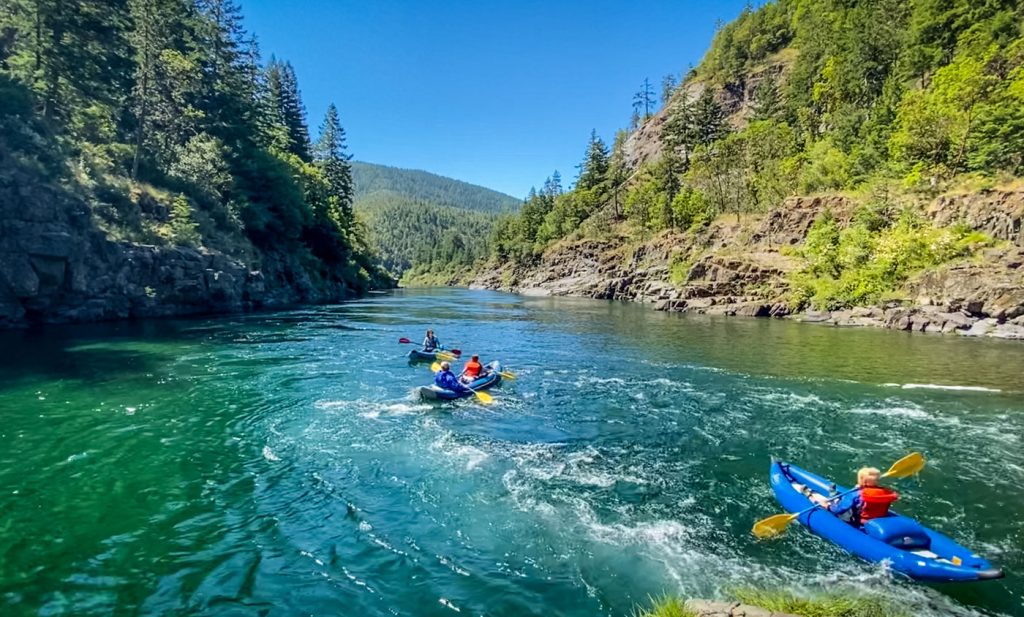 If you need gear, Redwood Rides has you covered with kayak and paddle board rentals. They also offer shuttle service as well as a variety of tours, including easy river strolls, rafting, and ocean kayak adventures.